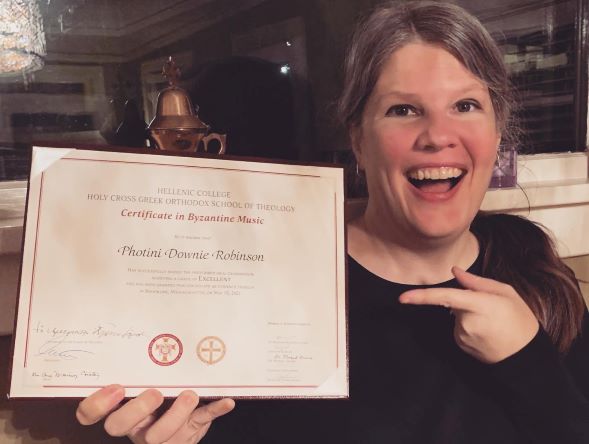 "Music has been an integral part of my life for as long as I can remember. My parents sang in the choir at the Presbyterian church in suburban Detroit where I was raised, and I began piano lessons before my feet could touch the ground. I played flute in the school band and later in the Metropolitan Youth Symphony. At fifteen, I began voice lessons and was active in the school choir and musical theatre productions.

"I did my undergraduate work at DePauw University in Indiana where I completed a double major in Vocal Performance and Computer Science. After graduation, I accepted a tech job in the Cincinnati area and concurrently began my side hustle as a professional singer with the Vocal Arts Ensemble. A job assignment transferred me to Montpellier, France where I spent eighteen months working on technology projects at various sites around western Europe.

"Upon my return to the US, I settled in Portland, Oregon. Looking for singing work, I was an active substitute on the liturgical circuit and eventually found my way into Cappella Romana. Cappella is a professional vocal ensemble that specializes in the liturgical music of the Christian East and West. The group can be as small as 6 or as large as 26, depending on the demands of a particular project. My first experience with Cappella was a piece for double choir, the Christmas Kontakion by the late Richard Toensing, which required a few extra singers from the local freelance pool. That was 15 years ago, and little did I suspect how dramatically that connection would alter the course of my personal, professional, and spiritual life.

"I continued to work with Cappella on larger projects, and gradually I became part of the core group of singers. I learned some of the greatest choral music of the Orthodox canon and became familiar with liturgical service texts in English, Greek, Church Slavonic, and even Finnish. This was my first exposure to Byzantine Chant, a new and exotic soundscape to my western ears, and I felt compelled to learn more.

"Eventually, I found myself so mesmerized by Orthodoxy in general, and Byzantine Chant specifically, that I had to know it from the inside. At different points in my catechesis, I had several mystical encounters – first with Christ and later with St. Photini herself – that invited me with astonishing clarity to embrace my faith without fear. I was chrismated into the Orthodox church in 2015 with Fr. Ivan Moody as my sponsor." 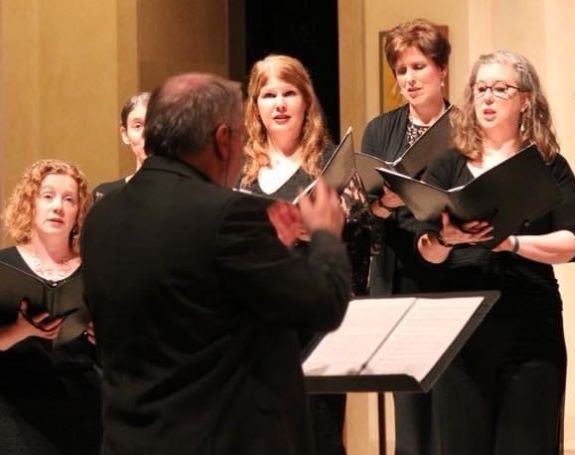 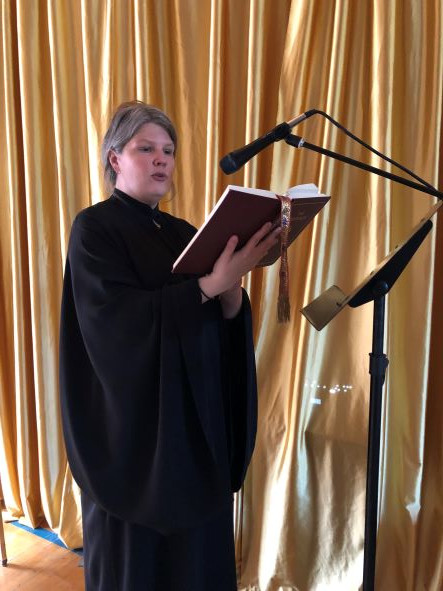 Photini Downie Robinson, our Woman of the Week, was nominated for her work in Byzantine music, as the founder of Yphos Voice Studia and a singer with Cappella Romana. You see her here chanting in her parish during the pandemic, teaching chant at a parish in Fort Wayne, Indiana, and on the verge of starting seminary in Portland, Oregon. We asked her to tell you about her voice studio and the surprises that have led her to pursue a seminary degree:

"I opened my voice studio in 2019 as a response to the discovery that very few chanters had any substantial vocal training. I was starting to field questions of vocal technique from chanters around the country, particularly from other women who, like me, were trying to navigate what classical singers call the lower passaggio – that awkward transition between the powerful lower register (most often associated with pop and folk music) and the resonant upper register that is the hallmark of classical singing. Traditionally pitched, most Byzantine Chant sits in the weakest part of the female voice: that is, too low to harness the soaring power of the “head” voice, but too high to sit comfortably in the “chest” voice. This can be especially challenging when we chant in mixed groups of men and women, either together or antiphonally, where one pitch must be selected to suit singers in both octaves.

"This part-time endeavor that began as a simple voice studio has blossomed over the years in ways I never could have predicted. Serving at analogion is about so much more than good singing, and the implications become even more complex for non-monastic women who are beginning to find their place as leaders in this historically male tradition. It is interesting to note that this is not a development born of modern-day feminism; I don’t know of a single psaltria (female chanter) who has intentionally sought the role of trailblazer. Paradoxically, it is about responding faithfully, and sometimes quite inconveniently, to a very real need in the Church. The truth is, most of us were recruited by our clergy and educated at our own expense.

"My students, female and male alike, want to talk about these things. Imposter Syndrome is not unique to women; men are also frequently recruited into leadership positions without adequate training or experience. We talk about feigning confidence under scrutiny and how to occupy space with dignity even amidst disagreement about whether we belong there. We explore the balance between diligent preparation and the ability to be flexible. We discuss leadership qualities and the art of combining assertiveness with grace. Many of my students are at the forefront of difficult conversations about how to organize their parish music ministries. I try to help them find ways to do this with sensitivity and heart. 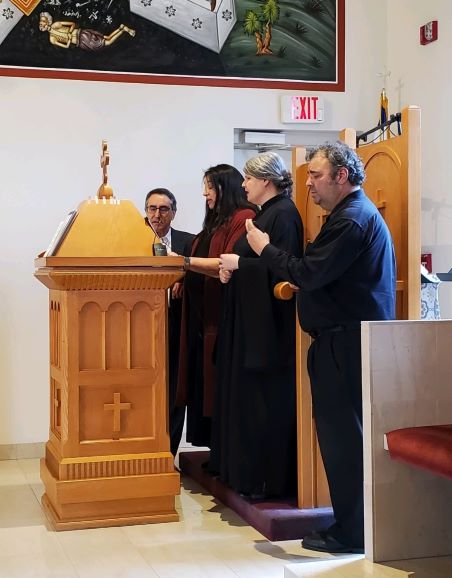 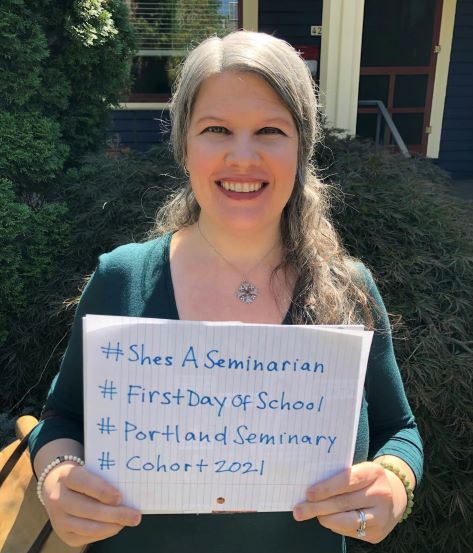 "Byzantine chant in 21st-century America is a delicate matter. We are at the intersection of differing ideas about what church music should sound like, the role of women in liturgical leadership, the proper language(s) of worship, different schools of training, and an influx of converts, all of which raise questions about Orthodoxy as a means of ethnic and cultural identity. As church leaders we must be deeply cognizant and respectful of this multi-layered and dynamic landscape. We must be willing to listen to those who challenge us and ask constructive questions that help us understand their concerns. There are ways to effect change that don’t dismiss or dehumanize those who have a different perspective.

"I have long felt a call to seminary, but for many years I was unsure what to do with it. Once I understood my singing and teaching as ministry, it then made sense to formalize my pastoral training. I am pursuing my Master of Divinity through the lens of chaplaincy, but the most tangible and immediate goal is to use my theological education as a means of informing the spiritual work I am already doing with my students. I trust that God will continue to provide clarity on a need-to-know basis."

As always, we asked our Woman of the Week, Photini Downie Robinson, about her morning routine. You see her here preparing the music for a church service and baking with her son, Paul:

"Confession: I am not a morning person. One of the best parts of being self-employed is that I am rarely obliged to wake up with an alarm. I’m a night owl and I do my best work in the wee hours when the rest of the world is on pause.

"That said, my husband and I do have a morning routine which we agree is one of the loveliest parts of the day. He usually gets up before me, feeds our two cats Theo and Niko, and prepares our coffee (a labor of love that I cherish every single day). We connect with each other over a lazy breakfast and review our schedules for the day. I’ll catch the highlights of my news feed and spend a few minutes practicing Greek on Duolingo. Then it’s full speed ahead into the activities of the day, and I won’t likely rest until bedtime. 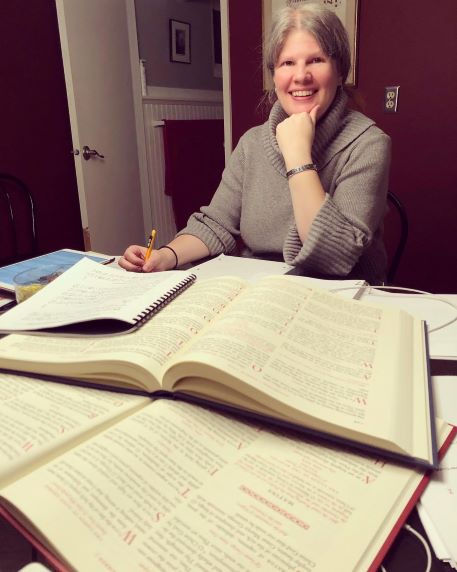 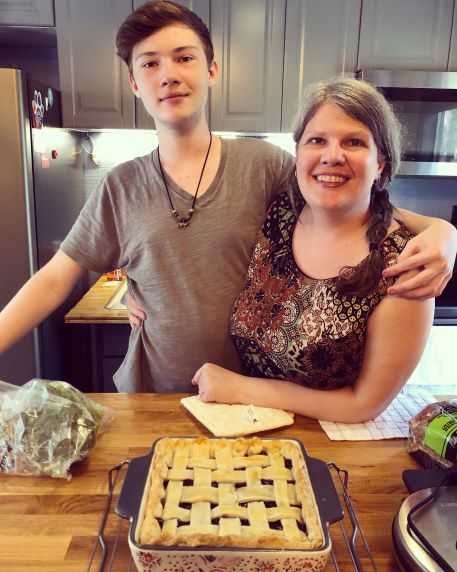 "I don’t have a designated prayer ritual, but I find myself in spontaneous conversation with God throughout the day. My prayer life was slow to come to fruition because I felt shy about approaching God casually. It felt disrespectful to show up with prayers that were disorganized or ill-prepared. And yet, aren’t those the times when we need God the most? In her Revelations of Divine Love, medieval Christian mystic Julian of Norwich surmises that “it gives God very great pleasure when a simple soul comes to him in a bare, plain and familiar way.” Life is messy and often my prayers are too, but God helps me find order and meaning in the chaos."