You Shall Not Be Put to Shame: Watching With Mary Magdalene 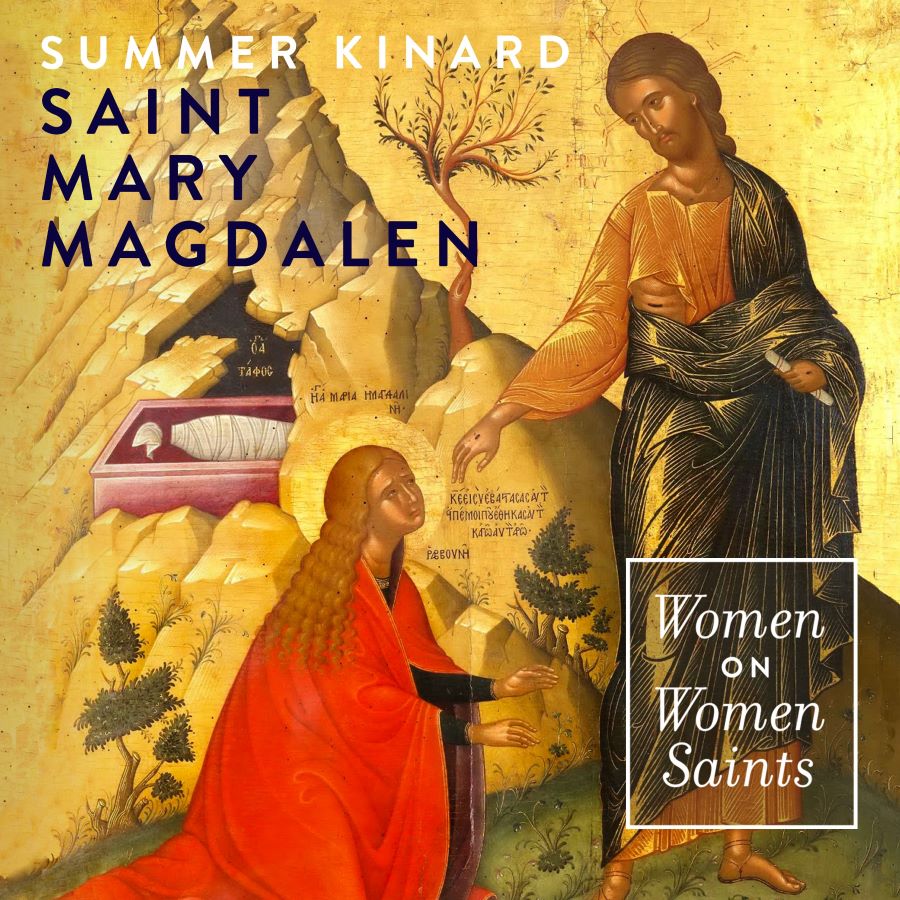 In this piece, we have a rare example of an Orthodox writer giving us a look at how the events of Christ's crucifixion and resurrection might have been felt by someone who had been healed by Him:

When she met Him, she had not seen light since a year after she inherited her estate in Magdala, when her grief had been assuaged at long last by its roses and citrons and dill and olives and the little goats that leapt when she walked by. Then came the jealous rivals and the curses. Then the demons. Her bright world had disappeared. She saw as if through foul water. Her old nurse bound her in linen cloths and walked her all the way to Jerusalem to see the priests and offer her goats for her healing.

The nurse was holding fine, soft bread up to her lips to coax her to eat, just as she had done when Mary was a child. Filled with shame of the curse that had come upon her, Mary could not eat. Why take bread, when the demons would abuse her strength in order to hurt her? She had been a gardener and at home in gardens. Where were her roses and olives? She had been useful and kind, turning out cheeses and herbs for guests and the poor, tending her animals so that they produced abundant milk and eggs. How could she kill her little milch goats who had loved her?

A crowd filled the streets. People whispered, “Healer!” Her shame crushed down upon her like a millstone. But the darkness in her thoughts and eyes could not erase every memory. She had been loved once, and her hands remembered opening to the face of her beloved, to set loaves into the arms of the needy, to receive the light of Sabbath lamps. She would reach for the healer, even though she was no longer the person she had been. Even though darkness had invaded her like vines eating stones. She took her right hand in her left and pushed them forward with all her strength, opening them towards the ebb of the crowd around the healer. The demons cast her to the ground, and she fell forward onto her face. In the mud, soiling herself, unable to breathe, ashamed, she opened up her hands and hoped the healer would see her.

The sun rose. The water cleared. She could smell the breadcrumbs on her lips. She could think again. She knew her name, Mary, as if He had spoken it and given it back to her. The goats ran towards her and putted her hands with their little heads and stole her bread. She laughed at them and in joy looked right at Him and asked His name. He had told her, but her heart called Him sun, her heart called Him bread. She sent the goats home with the nurse and followed Him, the brightness of her life.

Now the sky darkens, and the birds stop singing. She’s standing there beside His Mother, with the other women disciples, so close under the cross that the passing soldiers almost trample on her feet. His blood has stained her hem. His death is a long, held breath while she watches for the tell-tale movement that proceeds His words. He’s drawing a deep breath. She stifles a sob she didn’t realize was coming and turns her face entirely upward to hear Him. “It is finished.” Oh, no. She knows what this means. He had told them. But it is happening. A great shuddering breath, a wind that comes from everywhere, and stillness falls. It is like a Sabbath without a light. Nothing makes sense.

The first horn sounds to call laborers from their fields to prepare for the day of rest. The men come, Joseph and Nicodemus. They take Him down and let His Mother kiss His face goodbye. While the women were watching, Joseph and Nicodemus were shopping. They have laid out clean, strong linens, finer than what He wore when He walked with them and taught them and fed them bread as though it were easy. They have brought a king’s tomb worth of myrrh and aloëswood, enough to purchase half of her estate in Magdala. They work efficiently, as though they had planned for this moment. They must have been paying attention, too. They wash away the iron tang of blood, the sweat-leather-vinegar-salt smells from His Body. He goes into the tomb in time for everyone to rush home anointed with the clinging, royal scent of grief.

She stays with His Mother. Mary scuttles to set out wine and arrange the bread that someone has brought and covered with a cloth. His Mother pours oil into the lamps and lights them. They will burn until Saturday night. The Magdalene can’t help but remember the stories He told about the oil. Maybe He will return in the night.

The other women arrive just in the nick of time to lay down their burdens for the sabbath. They have brought fruits and cheeses and honey and all the spices they could borrow from the kitchens of their relatives or buy from the merchants rushing to close up shop. They set them aside and gather around the table. Just one day ago, their eyes wrinkled in joy. Their hearts were full. But now their hearts pour out like wine into the space between each other, their grief a cup that leaks and overflows at once, filling every cranny of the room.

Johanna has brought linen rags, and Mary the wife of Cleopas has drawn water. The women wipe their tears and soothe their parched throats, sore from keening that rises and ebbs among them. His Mother leads them in singing Psalms, and Mary Magdalene falls asleep to the sound of them. “Why are you downcast, oh, my soul?”

She wakes in deep night. For a moment, she is caught up in the darkness beneath His cross before that last breath. Is it still happening? Ah. She draws a breath that smells like sadness and love. It is only the clink of pottery that has awakened her. Someone has opened a jar of myrrh. She stands up and tucks back the hair that has stuck to her dried tears. She cleans her face and hands and goes to help His Mother, who is lighting smoky blue reed lights from the last flames of the sabbath lamps. Side by side, Mary and His Mother scoop together fragrant spices and the myrrh. The others wake up. Martha and her sister go out for an hour and return with aprons filled with rose petals from the gardens. They have no pots large enough, so they mix the spices and the flowers and the myrrh together in the carved wooden dough trough. It’s over an hour till daybreak when they scoop the mixture with their hands into jars and set out into the waning night toward His tomb. Martha, ever practical, asks, “Who will roll away the stone for us?”

No one speaks. Their throats are parched from crying. They have not spoken all morning except to pray, and even those words were more like sighing. Each of them is a woman with reliable hands. Mary Magdalene touches Martha’s shoulder to comfort her. The morning Psalm hangs in the gesture between them as if they had sung it anew, “Hope thou in God.” Their eyes turn back to the path. A tremble passes through the earth, and they clutch their jars closer. The tremor has shaken loose some rocks. They walk carefully, leaning the dim reed lights low to pick their way along the winding lane. The last, narrow path to the tomb is brighter, and the women blink as their eyes fill with light too bright for a lamp. For a moment they are caught in the light, their faithfulness revealed in their tired eyes and weary bodies and capable hands holding jars of myrrh and spices.

An angel appears so suddenly that it might have been there all along, waiting for their eyes to adjust. They meet face to face, the fiery heavenly creature and the women disciples of the Lord, mirror images of devotion. Behind the angel, soldiers lie catatonic with terror. Yet the angel says to the women, standing, “Be not afraid.” They feel courage enter them at this greeting. Their fear took flight so long ago, when they pushed aside shame in order to follow Him. The angel does not banish what is not there, but kindles their hope. They clutch their jars and nod, feeling the weight of the myrrh lighten as they find that it is no longer needed. They lean toward the angel to hear its news, as if it were a friend at the well and their jars were for water, and pausing, attentive, they catch the fragrance on the wind. Myrrh and aloëswood. The tomb is open.

Post-script. When I wrote this piece in the spring, I was preparing for the conference, "Women Writing About Saints" (sponsored by Park End Books on July 11, 2022) and planning a set of essays on myrrh-bearing as a model for family life for a forthcoming project led by Kathryn Reetzke. Though I focus on nonfiction for my accessibility work, I'm a storyteller at heart. I knew that the best way to talk about my love for this saint was to show you through creative nonfiction narrative rather than to tell you. As an autistic Christian, I have always asked questions about the physical realities in biblical stories. With the myrrh-bearing women, there are a lot of sensory anchors to catch one's attention and imagination: the mixing of the myrrh and spices, the sleepless night, the Sabbath routines that had to be observed even on the darkest day. I also wonder what happened to the unused myrrh from that morning. Did it go to heal another? To sanctify another body? In my prayerful pondering, it seemed to me that some things were embalmed in that myrrh:  the expectations of what we women thought we were meant to be before we were met on the road and made into apostles, the reduced remains of what passes for womanhood before the eyes are opened to see womanly virtues and faith, the fearful smallness that is swallowed up in the freedom of Christ. All of these are soaked through with that leftover myrrh and changed into gifts, into blessings of God's own daughters. I wrote about St. Mary Magdalene immersively to bring forward a message that I believe women need to hear more in the church: You shall not be put to shame.

Summer Kinard, M.Div., Th.M. (early church history and theology) is an autistic Orthodox Christian theologian, accessible church workshop leader, and Christian education director. Summer is the author of Of Such is the Kingdom: A Practical Theology of Disability (Ancient Faith 2019), one of the authors of Seven Holy Women: Conversations With Saints and Friends (Ancient Faith 2020), and a contributing author and editor of the highly-acclaimed devotional Darkness is as Light (Park End Books, 2020). Her book Our Autistic Home: A Handbook for Autistic Thriving is due out in late 2022 from Park End Books. She’s the owner and senior editor of the traditional small press, Park End Books (ParkEndBooks.com), which seeks to bring emerging Orthodox and Catholic authors to the mainstream bookselling market. She and her husband Andrew are rearing five autistic children of joy in Texas. Follow her work at SummerKinard.com. 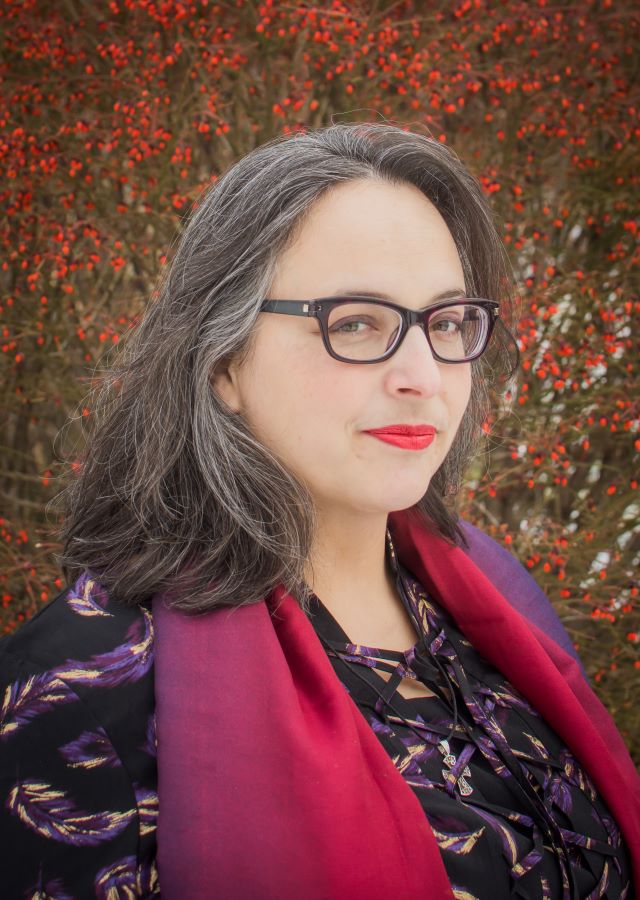