Recap: Ask an Expert about Confession 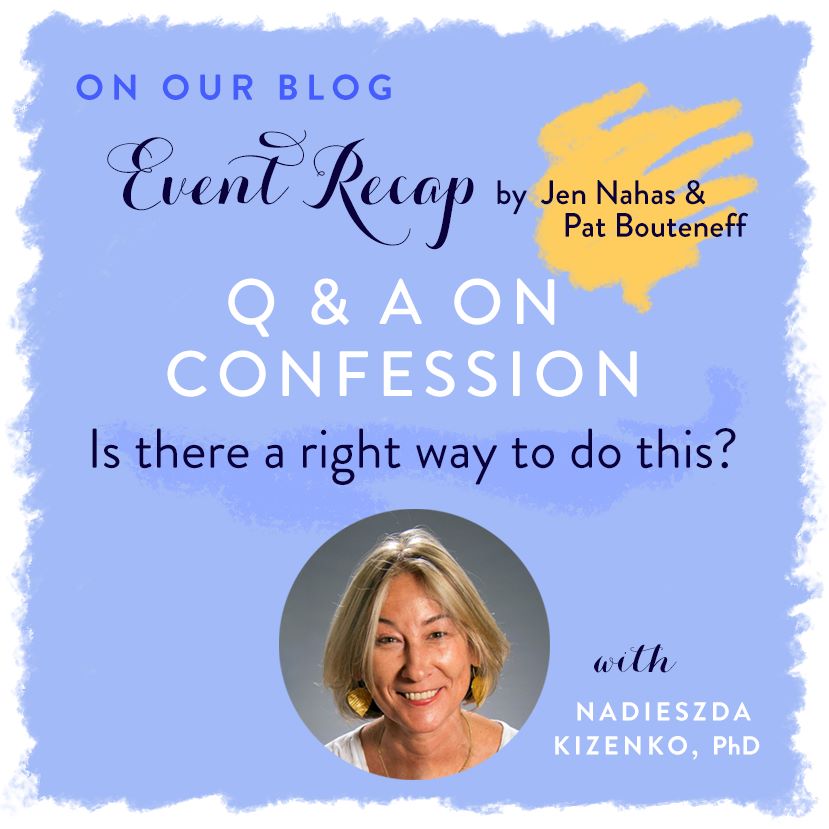 On December 4, we were immensely fortunate to welcome Dr. Nadieszda Kizenko to walk us through an Orthodox ethos around confession–how  it developed, the wide variety of traditions that have developed from it, and how we might approach it now. So many of us struggle with confession–it’s such an intimate, personal rite. None of us seem to feel that we do it correctly. Maybe that’s partly because practices vary so much from place to place, but isn’t it also because it’s hard to find someone to give us guidelines? As always with our Ask an Expert sessions, we asked everyone who registered to send their questions–and we received a wide variety of fascinating and urgent ones, showing all the more how this theme is so important. We were so fortunate to have someone speaking to us that is not only a scholar who spent several years researching and writing a book on confession, but who also grew up with a father who, as a priest, had his feet firmly on the ground.

Dr. Kizenko is professor of history and religious studies at the State University of New York in Albany, and a self-confessed "liturgics nerd". Of her first book, on St. John of Kronstadt, a priest in my diocese once said something like, “It’s such an important work, not least because it shows how there’s no conflict between academic theology and a life thoroughly engaged with the parish life of the church.”  Her second book is a history of confession in Russia over a 400-year period. That book is called Good for the Souls: A History of Confession in the Russian Empire. Her latest project explores the intersection of women, devotional practice, and writing. She’s also recently joined Axia Women as our Senior Advisor, which we couldn’t be happier about.

In the Q&A, she walked us through confession’s origins as a public, community occasion, and how fears of violent reactions to hearing admissions of adultery drove priests to move it to a more private sphere. She then gave a very grounded account of the sheer variety of confession practices out there. She reminded us that there is no common playbook for confession in the Orthodox world. There are many variations across the jurisdictions. To give two examples, Russian parishes have historically required confession as a prerequisite to communion, while in the Greek tradition, absolution is more common and not all priests are blessed to hear confession. There are women, such as abbesses, who are blessed to hear confession, which can be helpful for other women who aren’t comfortable confessing some things in front of a man, but absolution must be given by a priest.  (Abbesses are also usually designated as spiritual directors.)

Dr. Kizenko cautioned us on the difference between a confessor in a parish (he’s there to pray for you as you confess, not be a clairvoyant who sees into your soul, because most aren’t) and a spiritual director (who’s there, possibly as a clairvoyant, to help guide your spiritual practice). Properly speaking, confession is meant to be a meaningful process of bringing relief from spiritual burdens and the ways that we separate ourselves from Christ. The priest’s role is to bear your burdens with you. She reminded us that if you think something happening or something being said is crossing a line, then it probably is, so trust your own inner guide–both about what you need to confess and whether the experience that you are having is spiritually beneficial.

She spoke of the variety of her own experiences confessing to priests in Russian and Greek churches and monasteries, and gave us a sense of the freedom that confession can provide, however poorly we may think we do it. She pointed out that, while confession can occur at any time during the liturgical year, like many others she finds Lent to be the perfect season to think about where we struggle. As a starting point, she suggested reflecting on whether we are living our life the way we’d want to in the presence of Christ. And she most generously provided us with materials to distribute that she has found useful in her own spiritual practice.

Axia Women is very grateful to Dr. Kizenko--and delighted to make this webinar available at a nominal cost to Orthodox women who could not attend the live session.

Note: We’ve had a request to have a co-ed version of this session and–good news!–we’ll be scheduling it sometime in the new year. Keep an eye on this space!