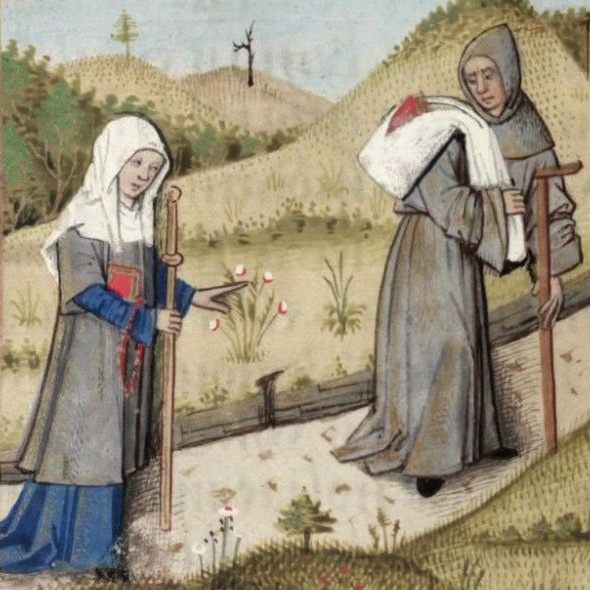 Welcome to the first post in what we hope will be a journey in its own right, a series of women writing about women saints, many of whom may be new to you or who you may see in a fresh light.

"On the next day, crossing the sea, I arrived at Constantinople, giving thanks to Christ our God who deigned to give me such grace, unworthy and undeserving as I am, for He had deigned to give me not only the will to go, but also the power of walking through the places that I desired..."  --St. Egeria

I see myself as a pilgrim in many parts of my life. Finding my saint--a saint that speaks to the person I am–has been a journey in and of itself. It took years to find a saint I could turn to for love, healing and inspiration.  Luckily, I was never alone in my search, thanks to Mary, the Mother of God, who is always my go-to, my touchstone Saint. Women didn’t venture out of the home much when Christ was with us, as far as I knew, so it made sense to me that women wouldn’t be in the limelight as much as the Apostles were. Men were the ones who recorded the stories passed down to us, so they may not have noticed the contributions women were making.

I didn’t think much about female saints, or if there was indeed a saint out there for me, until 2018, when I had to manage a very difficult and unexpected divorce. To clear my head and heart, I took up my walking stick and joined thousands of pilgrims on Spain’s Camino de Santiago, the mythical (and mystical) path of St. James. This walk’s indescribable beauty, imbued as it is with light, open fields, rain, and the sound of my own footsteps, changed me at my core.

The Camino teaches you that God is with you every step of the way, and the key to experiencing his love is to quiet all the noise in your head, empty yourself of material and emotional baggage, and fill yourself with the beauty that is all around.  The pilgrims that I met shared stories about saints who walked the Camino. Not surprisingly, all of them were men, with St. Francis of Assisi being the most famous.

When I returned home, the Camino continued to grow in my heart, and I would often look for accounts by other people who had also walked pilgrimages. It took weeks, but one day I was breezing through a National Park magazine at work when my eye caught a very small blurb with the title: First Female Pilgrim, St. Egeria. My eyes nearly popped out of my head and my heart felt like it stopped. Was someone joking?  Who is this woman? Why have I never heard of her? And she’s a canonized SAINT? Tell me more!

Here’s the scoop. St. Egeria was a pilgrim who undertook a very long journey. Her  pilgrimage lasted three years, during which she visited numerous holy sites sometime between 378 and 388. She was on the road for three years!!!  And get this:  she kept an extensive, detailed diary, a first-hand account of her journey, an eyewitness account of her sojourn in Jerusalem, and the itinerary of all her travels in the Near East. What a treasure she created for all of us. 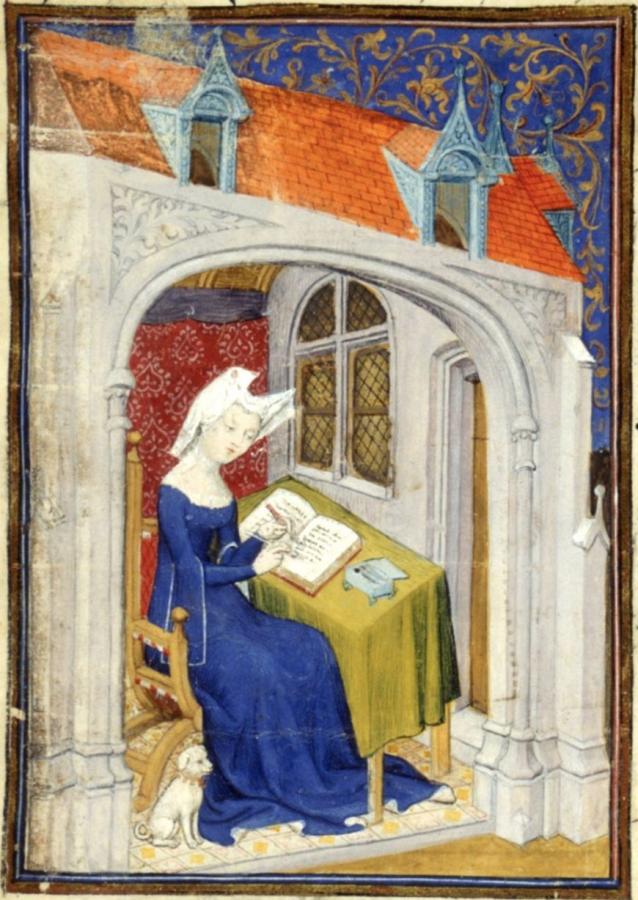 St. Egeria was no ordinary traveler. It was uncommon for a female to travel on her own, and even more dangerous for her than for a male counterpart. She did it anyway.  She made the arrangements, led a team, and pushed through some terrible conditions. Evidence supports that she was probably a nun (her writings are directed to her “sisters”), who came from wealth, from a family connected to the imperial court of Empress Pulcheria.

She was probably born in Spanish Galicia, a place I myself had actually walked through on the Camino! And, it is also believed she is buried in the Santiago de Compostela Cathedral.  The Cathedral marks the end of the many Camino pilgrimage routes that crisscross Spain and Europe.  How had I missed kneeling before her when I offered my prayers at the end of my pilgrimage?

With the Bible as her roadmap, Egeria traveled far off the beaten path to many different provinces, cities, and isolated spots. Most parts of her journey were rugged, inhospitable, and perilous (bandits, anyone?). She went to great lengths to get to obscure places, notably, Judaea and Galilee, Tabor, Eremus, the mountain of Elijah, Mount Nebo (where Moses died), and Harran (where Job’s tomb and Abraham’s house were), and, of course, the must-visit destinations of Constantinople and Jerusalem. I can imagine that she craved the open landscapes, the intensity of the stars, the quiet of the road to be awestruck when she arrived at these crowded Holy Sites. Her diary records her arrival on the shores of the Red Sea, swimming in the Dead Sea, climbing up the steepness of Mount Sinai and retracing the route of the Exodus to visit the tomb of St. Thomas.  St. Egeria’s writing is especially vivid about arriving at the shrine of St. Thekla. St.Thekla, also known to travel, was a seminal spiritual figure for St. Egeria. I can imagine the sense of comfort and ease she experienced when embraced by her sisters.

Part of what drives scholars’ interest in her work is that, remarkably, her diary also specifies details of the many liturgies and feast days she attended in Jerusalem, which makes her one of the earliest liturgists and anthropologists. She has a gift for capturing small liturgical details, and for this our Church is eternally grateful. She notably brings to life what worship looked and felt like in the early years of the Church as few others thought to do.

Through it all, she tells us over and over that her journey wasn’t primarily about adventure or documenting worship practices. What was most important to her–and to me–was how pilgrimage let her learn to be with God. That’s what truly speaks to me about St. Egeria.  Her journey confirms her faith, as she meets and prays in the company of others who are dedicated to Christ:  monks, nuns, bishops, and faithful laywomen and -men.  She writes about being transformed by God’s presence through her adventures and how they focused her heart and mind solely on Christ. Her writings aren’t merely a dry documentation of what she saw; they are filled with the Holy Spirit as she is always reflecting on the joys of discovery while weathering the difficult path toward Christ.

St. Egeria was a travel writer, a mountaineer, an anthropologist, a historian, a liturgist, a spiritual seeker, and an explorer who defied convention to find God. Even though it took me a longtime to find my saint, her timing was perfect. I am a pilgrim, a researcher, an adventurer, and a spiritual seeker. Part of my work in the outdoor gear industry involves inspiring all types of people–particularly women and people of color–to live more of their life outdoors and experience the divinity of the natural world. Learning about the life of St. Egeria was like learning about myself.  I am thankful she found me, so I am not alone in my rump-arounds, always drawing strength and determination to weather challenges.  Now when I’m pushing through the pain of blisters on my feet, the rain hitting my face to reach the wilderness at the top of  the mountain, I set up camp and open my eyes and see St. Egeria and the beauty all around me. 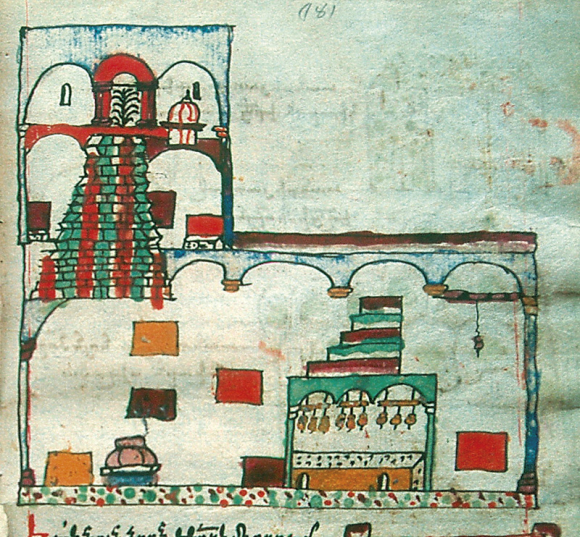 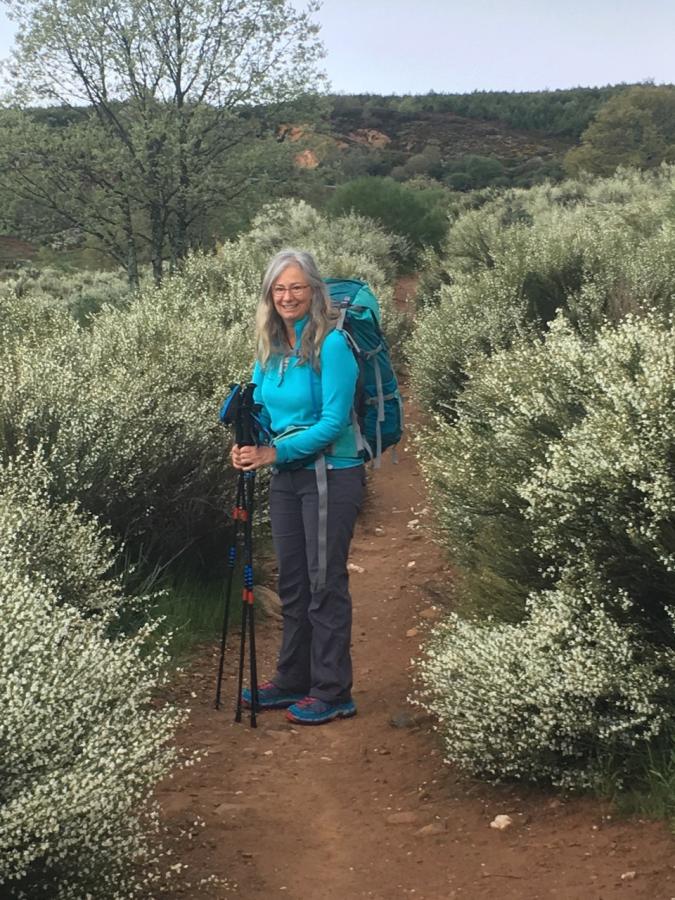 Jennifer Nahas is Axia’s treasurer and a long-time program evaluator. She now works in the outdoor gear industry where she hosts workshops and helps outfit folks for long walks. She herself has walked the Camino de Santiago, an 8-week pilgrimage across northern Spain, and has also hiked a weeks-long trail across northern England.

Images from the top: a nun on pilgrimage from a manuscript at the Bodleian Library, Oxford University; copy of  a line drawing of medieval Jerusalem; portrait of Christine de Pisan from the Queen's Manuscript; and one of a series of medieval Armenian manuscript illuminations of sacred sites.