The Transfiguration is one of those beautiful feasts that can hold a strong personal message for many of us. Here’s a reflection from another of our bloggers, Asha Mathai, on what it meant to her as she reflected on it this year.

Be transformed into something more beautiful or elevated!  How many times have I blamed my misdeeds on my humanity?  “I’m only human.” I made my humanity an excuse as a reason to explain why I don’t do what God is asking me to do. But the Feast of the Transfiguration, which we celebrated on August 6, helped me see how Jesus shows me how to rise above that.

I went back to look at the Transfiguration in the synoptic gospels of Matthew, Mark, and Luke.

The event begins when Jesus selects three disciples (Peter, James, and John) to go with him up the mountain to pray.  But St Luke tells us, somehow, in the midst of praying, the disciples fall asleep.  When they wake up, they see Jesus, and his clothing has become dazzlingly white.  And Jesus isn’t alone: he is speaking with Moses and Elijah,  discussing Jesus’ departure at Jerusalem.

St Peter, uncertain yet in awe of the moment, volunteers to build three booths (tents) for Moses, Elijah, and Jesus. All of a sudden, the disciples find themselves in a cloud: “And a voice came out of the cloud, saying, ‘This is my Son, my Beloved; listen to him!’”

St Matthew tells us, “When the disciples heard this, they fell on their faces, and were filled with awe.”

St Matthew then states that “Jesus came and touched them, saying, “Rise, and have no fear.”

When I thought about it, I realized that this event has many similarities to Moses on Mount Sinai, from the booths, to the dazzling appearance, to the exodus.

First, those tents. Why does St. Peter say he will construct them? From what I understand, it may be related to a Jewish festival, a reminder of the Jews needing to live in temporary shelters while traveling to the Promised Land.  In their Festival of Booths, Jews continue to recognize how they lived in temporary shelters and how God brought them to the Promised Land. Moses represents the Law. Elijah represents the prophets. Peter believes that Moses and Elijah and Christ all belong in the booths, but God instead says, “He is my beloved Son.”  St. Peter should learn that Christ is greater than the Law and the Prophets.

Another example, Luke 24, tells of two disciples walking to Emmaus and encountering Jesus—but not recognizing him: “And beginning with Moses and all the prophets, he interpreted to them in all the scriptures the things concerning himself.”

Thus, Jesus did not come to stop what was already in place—the law and the prophets—but to bring them into completion. Christ shows his disciples that the Law and Prophets are about him.

Second, I thought about the fact that Jesus’ clothes become dazzling and his face bright. Matthew 17 says, “There he was transfigured before them. His face shone like the sun, and his clothes became as white as the light.” Moses on the mountain also became dazzling: no one could look at Moses’ face, it was shining so brightly.

Third, what is Jesus conversing? He discusses his departure. In Exodus, Moses led his people on an exodus from Egypt, to free them from their oppressors. Here, we find Christ leading his people in his exodus. We are in a form of our own exodus as we go to the Promised Land. St Paul in Philippians 3:20-21 writes, “But our citizenship is in heaven. And we eagerly await a Savior from there, the Lord Jesus Christ, who, by the power that enables him to bring everything under his control, will transform our lowly bodies so that they will be like his glorious body.”

What does this mean for me, for us?

Jesus takes the disciples up to pray and becomes dazzlingly bright.  Jesus appears as a servant, and at this moment, he appears dazzling. When we pray, we become transfigured. We change. Just as Moses was transformed in the presence of God, we became changed.

I can see that Jesus is not only a human being but also the Son of God.  Thus, when I claim that I am only human, it does not mean that I am faulty, but that I can rise above that and become like Christ. Christ shows me the way because he is the way. After they’ve heard the voice of God, Jesus tells his terrified disciples, “Rise, and have no fear.” That is a reassuring message for me and for all of us. Have the courage that God is with you.

Asha Mathai holds an MA in theology from St. Vladimir's Seminary and is currently studying for her ThM. 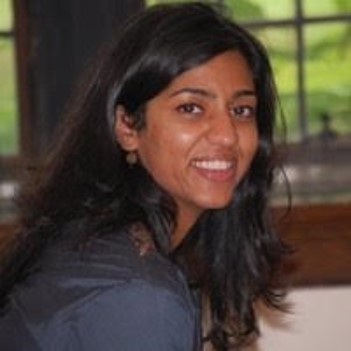